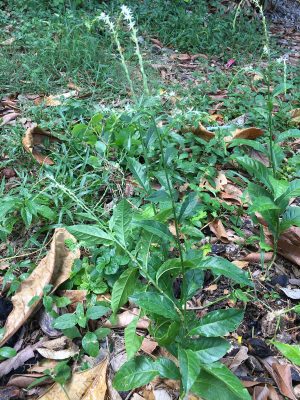 The Guinea Hen Weed is a popular herb that has been used for quite a long time for medicinal purposes. It is popularly known as Anamu in South America and has got several names in Jamaica such as Gully Root or Garlic Weed. Its botanical name however is Petiveria alliacea. The herb has been used by both herbalists and health practitioners to remedy several conditions. Over the recent years, studies have been put into intensively researching on the herb to figure out all its health benefits. These studies have revealed the numerous benefits that one can enjoy through the use of Guinea Hen Weed.One of the benefits of Guinea Hen Weed is that it is a great way to keep cancer at bay. The herb has got certain compounds that work pretty effectively in inhibiting the growth of a wide variety if strains of cancer. It also prevents the growth of leukemia cells. For instance, phytochemicals such as astilbin and dibenzyl trisulphide that are contained in anamu have been observed to kill cancer cells directly. It is interesting how the compounds of the herb are able to distinguish between the cancerous cells and the normal ones as they often leave the normal ones unaffected. By using the herb therefore, you can rest assured that you reduce your chances of suffering cancer considerably.The Guinea Hen Weed has also proven to very effective in boosting the immune system. Its immunostimulant properties have been verified both scientifically and practically. It helps in boosting the immune system by raising the production of lymphocytes as well as the natural killer cells which are very powerful when it comes to destroying diseases. The herb also enhances secretion of interleukins and interferon. The two are substances that are produced naturally by the immune system and are used in combating both infections and cancers.Traditionally, anamu was used to help remedy various kinds of infections. Scientific studies that have been conducted on these effects have proven that it is as a matter of fact, a very effective way of fighting infections. Its antimicrobial properties are just amazing and it can be used against bacteria, viruses, yeast as well as fungi. It contains compounds that will kill these germs directly or inhibit their growth.In as much as not much study has been done on Guinea Hen Weed in relation to diabetes, the uses of the herb in controlling blood sugar has indicated beyond reasonable doubt that it is effective in lowering blood sugar. For many years now, the herb has been used in Cuba and certain parts of the world to help in controlling high blood sugar levels.For the best results, it is often advisable to go for Guinea Hen Weed that is organically grown. They are usually free from herbicides, insecticides and other forms of pollution. One liter of water should be used to prepare powdered Guinea Hen Weed heaped on a tablespoon. It is recommendable that the tea be taken on an empty stomach twice every day.
Read More
Categories: Jamaican Herbs
Do NOT follow this link or you will be banned from the site!