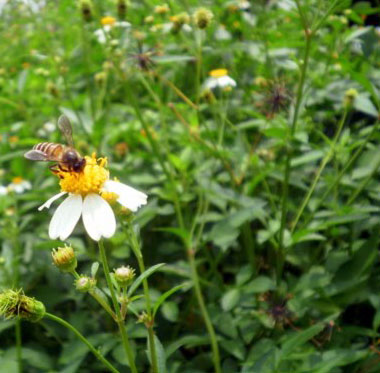 The Spanish Needle is scientifically called Bidens Pilosa. It is a medical herb that is native to Southern America. Although it is largely considered a weed, it has become common a source of medicine and food in many parts of the world. This annual herb grows aggressively and it could climb to a height of about 2 meters. The Bidens Pilosa’s leaves are arranged oppositely and have a resinous flavor. The leaves can be eaten in stews, raw, or stored dried. It is a natural-growing plant in Jamaica and it is sometimes called by different names, such as Needle Grass, Beggars Tick, Black Jack, Demon Spike Grass, and Broomstick.

How to use Spanish Needle

The Spanish Needle has a variety of health benefits and it may be used in different ways. The leaves may be used as a potherb or eaten raw in a similar way to green vegetables. The Bidens Pilosa may be cooked alongside dishes such as cabbage and callaloo to produce a healthy and tasty meal filled with a lot of health benefits. When crushed, the leaves of this plant produce a sap that can also be used on fresh wounds to speed up blood clotting.

Uses across the world

It is a very important plant in Eastern Africa, where it is referred to as Michicha. In Vietnam, soldiers would consume the herb as a vegetable during the war. This led to it being referred to as the “soldier vegetable.” Traditional Chinese medicine considers this plant as a medicinal herb and it is referred to as “Xian Feng Cao.” Traditional Bafumbira medicine applies this medicinal herb on fresh wounds to hasten blood clotting and it’s called “Inyabalasanya.” In Southern Africa, the extract is used in curing malaria. In Jamaica and different parts of the world, it is used in making herbal tea. This herbal tea is mostly used as a general beverage, antibiotics, or in treating flatulence and worms. The Spanish needle can be purchased online at Island Herbs & Spices.

This herb’s seeds, leaves, and roots have antimicrobial, antibacterial, anti-inflammatory, antiseptic, and antidysentery properties. The herb also has antimalarial properties and it serves as a diuretic. The extracts from this herb are used in certain cultures to treat malaria. The herb’s antiseptic properties make its extract used as a natural mouthwash. This is particularly useful in fighting odor-causing germs and also used in treating sore mouth and gums. The herb is effective in treating swellings, stomach ailments, colic, joint discomfort alongside flu and cold. Browse our site for a wide selection of 100% organic Jamaican Spanish Needle tea, and other herbs and spices today.
Read More
Categories: Jamaican Herbs
What is Spanish Needle? Spanish Needle, scientifically known as BidensPilosa, is a medical herb that forms part of the Asteraceae family. The plant is native to South America but has become common in many tropical and subtropical areas of the world. The annual plant grows to about 2 metres in height and grows aggressively, often times becoming weedy. The Spanish Needle’s leaves are oppositely arranged and the plant may flower at any time of the year. The plant grows freely in Jamaica and is also known by names such as Black Jack, Needle Grass, Broomstick, Beggars Tick and Demon Spike Grass. How to use Spanish Needle? Spanish Needle may be used in a number of ways in order to reap the plant’s health benefits. The leaves may be eaten raw like green vegetables or used as a potherb. Spanish Needle may also be boiled and prepared with dishes such as callaloo and cabbage to create a tasty and healthy meal that is loaded with a number of health benefits. The sap obtained from the crushed leaves of the plant can also be used on fresh cutsto aid in speeding up the blood clotting. Spanish Needle is also used in Jamaica and in many other parts of the word to make herbal tea. The herbal tea prepared from the plant is commonly used as a general beverage or as a treatment for worms and flatulence. Health Benefits of Spanish Needle The root, leaves and seed of the Spanish Needle have been known to possess anti-inflammatory, antibacterial, antiseptic, antimicrobial and antidysenteric properties. Spanish Needle also serves as a diuretic and contains antimalarial properties, making extracts from the plant a treatment for malaria in certain cultures. Due to the plant’s antiseptic properties, plant extract may also be used as a natural mouthwash to combat odor causing germs along with sore gums and mouth. The herb is also beneficial in treating joint discomfort, swellings, colic, stomach ailments along with the cold and flu.
Read More
Categories: Jamaican Herbs