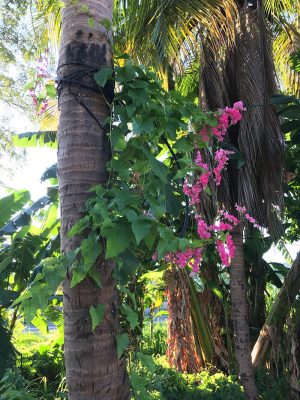 Antigono leptopus is a flowering plant from the buckwheat family, polygonaceae. Its other names are coral vine, bee bush, Mexican creeper or San miguelito vine. Not a lot of plants are completely edible but this is a unique feature the coral vine has. . It is a perennial plant that is native to Mexico and since it is food to a lot of people it has traversed the world. In some regions it is cultivated in landscapes as an ornamental since it has showy flowers.

A laptopus is a climbing plant that uses its tendrils to hold as it grows and it can grow to a maximum of 40 feet. Its leaves are coordinate, sometimes triangular or heart shaped crinkly edged reticulated and measuring 2 to 7 centimeters. The coral vines flowers are borne in pinnacles and their colors change from pink to white with changing seasons. Its flowers are found in clusters at the tip of the branches and they have hairy stalks.  Its stems are pentagonal and has many lateral branches.

The coral vine is a fast growing and an invasive plant that grows and spreads too quickly. If neglected it easily outgrows other vegetation and goes beyond where it was introduced. In other countries like the USA and Australia, this plant is consider as an aggressive weed occurring in tropical and insular environments. It has a dual reproductive capabilities, sexually by its seeds and vegetatively by its stems and underground tubers. It has the capability of tolerating bad soil and an extensive range of light conditions making it able to survive in different ecosystems.

How to grow the coral vine

Coral vines are well adapted to a number of climates and this makes it easy to grow. It does well in full sunlight but can also survive in a partial shade. The coral vine can be grown either by propagating its seeds or dividing a mature plant. Since it is a climbing plant, it needs support and as it grows you need to provide it with support.

To get the coral vine a good start, you will require to water it regularly during its first growing season. It is however a drought tolerant plant and after it has grown it would only require occasional watering. Since it is a very invasive plant there is nothing as important such as keeping it pruned. The best moments to prune the coral vine is n late winter or early spring.

Uses of the coral vine

The coral vine has a lot of uses. The tea prepared from dried aerial parts of this plant is used in the treatment of cold, sore throat and flu. Its flowers are used as an ingredient of salads and some omelets. Its tubers can weigh up to 10 pounds and they are eaten by many people from different places. In Thailand  its leaves are dried fried and served with different types of noodles.

Categories: Jamaican Herbs
Antigonon leptopus bee bush Coral vine Mexican creeper San miguelito vine.
Prev postNext post
Periwinkle is one of the herbs that is widely used in the treatment of brain health. Periwinkle is
Read More
Surprising Health Benefits of Breadfruit Leaves Breadfruit is a species of flowering tree in the mulberry family that
Read More
How to improve fertility with the Jamaican Dog Blood Bush Dog Blood Bush (Rivina Humilis), also called pigeonberry
Read More
5 Health Benefits of Sarsaparilla Sarsaparilla is a tropical, climbing vine with prickly stems that is native to
Read More
Are Medicinal Herbs Safe to Use? An herb is a plant or plant part used for its scent,
Read More
Wild grown herbs vs organic herbs Herbs are an important aspect of every natural ecosystem. Unlike other plants,
Read More
Pharmaceutical grade herbs Introduction For centuries, herbs have been an important aspect of life in different communities. There
Read More
The Plecttanthus amboinicus is a semi succulent perennial plant with a pungent oregano like flavor and odor. It
Read More
Lantana camara is a perennial flowering plant native to the tropical regions of Africa and America. When bruised
Read More
With the currents trends in technology and medicine, a lot of people across the globe depend on pharmaceutical
Read More