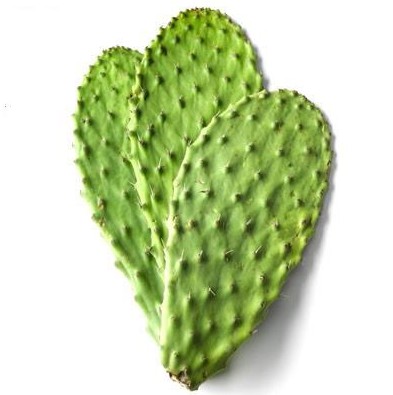 Prickly Pear is believed to offer a number of health benefits. The juice from the leaves is used to make drinks that are said to clean out the intestines. Tuna tea is also used to combat chest aches, fevers and help improve digestion. The plant also possesses binding properties, is used as an astringent and helps in reducing bleeding. One of the plants interesting properties is that it works well for weight loss and weight management due to its ability to bind fat. This means that the Prickly Pear molecules bind themself to fat molecules that a person has consumed and prevents the body from absorbing the fat. Its fat binding properties also help in reducing cholesterol levels in the blood. The plant is also used to bring relief from backaches, constipation and excessive menstruation.
Read More
Categories: Jamaican Herbs
There are two types of cassava, the bitter and the sweet. Both are widely used in Jamaica and are edible. Cassava leaves can be steamed and eaten as a vegetable.Medicinal and other uses: a.Freshly cut cassava can be applied to snakebites, boils and external ulcers to promote healing. b.It can also be grated and applied as a poultice for eczema and abscesses.c.The fresh leave applied to the head will relieve headaches.
Read More
Categories: Jamaican Herbs
CASHEW (Anacardiumaccidentale) The nuts are edible and are tasty. Perfect for cocktails. Medicinal and other uses: a. A tea made of the bark and leaves can be taken for diarrhea, indigestion, stomach pains, bowel disorder and dysentery. b. The oil of the seeds of the cashew removes warts, corns and freckles. c. The shells soaked in water make a good insecticide that can spray on plantThis plant and nuts can be special order from islandherbsandspices.comContact us Credit: LMH Dictionary of Jamaican HerbsL. mike Henry/k.Sean Harris
Read More
Categories: Jamaican Herbs
The breadfruit tree has a wide range of uses. The fruit is edible and may be prepared in a number of ways, and the leaves and the sap which runs from the tree can used for various ailments.Medicinal and other uses:   This plant can be special order from islandherbsandspices.comContact us
Read More
Categories: Jamaican Herbs
JAMAICAN WILD SWEET BASILIn Jamaica, it is believed that sweet basil, when planted by the doors, gates, and in window boxes, will prevent evil or negative vibrations from entering the household.KHUS KHUSIt is believed that if KhusKhus is carried around it will attract positive people, or if placed about the household will attract good vibrations.LEAF OF LIFELegend has it that the leaves placed over the door of your loved one will tell you if your lover has been faithful. If a new plant grows from each notch, your lover has been loyal. The amount of notches that do not produce a new plant indicates the number of times your loved one has been unfaithful.MANDRAKE ROOT Carry a piece in your pocket or pocketbook where you carry your money and you will never go broke.PAPAYA It is believed that if a young man beats his penis on the trunk of a papaya tree it will grow to a large size when he gets older.PEPPERMINT When simmered in an open pot will bring harmony to the household.SALVIA Believed to cleanse and drive out evil forces and bad luck.SPIRIT WEED When picked during certain phases of the moon, it has the power to make the person who chews the root invisible. The Maroons of Jamaica used it against the British during their resistance, and reports from British soldiers state that they could not see the enemy, throwing away their weapons they ran back to their camps with reports that the trees were fighting them, because they could not see the leaves moving and hear the rustling but could see no one. STAR ANISE Will drive away misfortune from household and attract good fortune if placed in a saucer on a table.YARROW If a piece of yarrow is sewn into a cloth bag made of cotton or flannel and put under the pillow, one would see fortune sweethearts or the one to marry, in a dream. Credit: LMH Dictionary of Jamaican HerbsL. mike Henry/k.Sean Harris
Read More
Categories: Jamaican Herbs
Aloe vera is very strengthening and cleansing to the entire body. Loe Vera is rich in calcium, potassium and vitamin B-12.Medicinal and other uses:a.It cleanses the kidneys, bladder and removes all morbid matter from the stomach and intestines. b.It is a strong laxative that cleans and purifies the intestines, bowels and colon. c.The dried gel of the aloe vera are mixed with unsweetened natural wine and used as a medicine for diabetes. d.It clears up red eyes, improves vision and brings out the natural colour or the eyes. e.It it used for sun burn, skin irritations and insect bites. f.It removes wrinkles and discolorations from the skin. g.When mixed with lion juice and applied as a poultice it heals skin, boils ulcers boils and ringworm. h.Aloe also relieves dandruff, stimulates hair growth, strengths the hair and kills bacteria associated with scalp disease. i.It heals and soothes burns, plus it prevents blistering and discolouration. Credit: LMH Dictionary of Jamaican HerbsL. mike Henry/k.Sean Harris
Read More
Categories: Jamaican Herbs
Do NOT follow this link or you will be banned from the site!